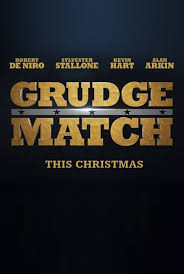 This Christmas Sylvester Stallone will be boxing Robert De Niro in the film Grudge Match.  It’s The Italian Stallion vs. The Raging Bull.  That promises to be a Christmas present worth waiting for.  My money is on Rocky.

The movie is about two retired boxers who come out of retirement for one final grudge match 30 years after the only time they ever fought.

The movie is directed by Peter Segal and the rest of the noteworthy cast includes Kim Basinger, Kevin Hart, Jon Bernthal, and Alan Arkin.

The film looks basically like another Rocky film.  I just want to see if the fight ends by knockout or heart attack.