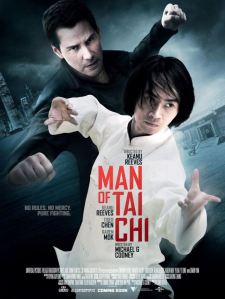 Keanu Reeves returns ruthlessly with a vengeance.  Not only is he a star in this film, but he also made his directorial debut.

The fact that this is a martial arts movie was intriguing to me because after watching Keanu’s fighting skills in The Matrix (1999), I was thirsty for a little bit more of his flying jump kicks and karate chops.  It’s just a bit of a shame that he waited so long after The Matrix Trilogy to showcase his combat expertise.  He is probably a little more known for his slow-motion bullet dodge than his actual fighting skills, but he has proved that either one can be sufficiently entertaining.  The bottom line is, Man of Tai Chi is Reeves in a fighting movie.

The film is about wealthy businessman Donaka Mark (Keanu Reeves), who discovers uniquely talented fighters who he then convinces to fight for him in underground and illegal fighting matches in China.  His most recent fighter, Tiger Chen (Chen Lin-Hu), has a special and virtually one-of-a-kind style of hand-to-hand combat with a Tai Chi base.  Tiger Chen needs the money, and the fights pay, but once he is in the game, Donaka Mark makes it difficult to stop.

The movie goes back and forth between spoken English and Chinese with subtitles.  It’s a foreign film with American and Chinese actors.  I believe that the joining of the two cultures in the film works to successfully portray the mix of each cultures’ fighting style.

The martial arts in Man of Tai Chi is depicted gracefully and eloquently.  The choreography is amazing.  The movie has some of the best fighting scenes that I have seen since The Raid: Redemption (2011).  Each move seemed so intentional that it almost felt like the fighters were dancing, but the dance was a work of art.

The film’s soundtrack helped to give what was happening on screen a deeper, more intense feel.

The movie started off impressively and this continued until probably the last quarter of the film.  It certainly had potential to be better, but I felt like the ending fell short.  This was pretty disappointing because it was so good up until that point.

Iko Uwais, who became famous for his role in The Raid: Redemption, was way underused in the movie.  If his character was given the chance to show what he was made of, the film could have reached the same caliber as The Raid: Redemption.  Instead, his part was cut far too short.

Man of Tai Chi was certainly crammed with action-packed goodness.  If it weren’t for the ending, I would give the movie a higher rating.  Even though the film was a bit of a letdown towards the end, it was still fun to watch.  Keanu did his job well, but his martial arts skill unfortunately didn’t add up to the rest of the fighters in the movie.

The Raid: Redemption is an absolute explosion.  The movie kicks like an energy drink.

I had heard that the movie was really good, but I did not know what it was about before watching it.  The only thing that I did know was that Mike Shinoda of LinkinPark and Joseph Trapanese developed the soundtrack for the movie.  They collaborated with Chino Moreno the lead singer of Deftones (one of my favorite singers and one of my favorite bands) and he contributes his awesome vocals to the first song in the ending credits called “Razors.Out”.  Being the big Chino Moreno fan that I am, I had downloaded the song off of iTunes before I had even heard of The Raid: Redemption.  The song meshes the sound of Linkin Park with Deftones.  I was bummed that they didn’t make a whole album together because it was pretty sweet.

The movie was filmed in Indonesia and the entire thing is subtitled, or you can choose to watch it dubbed over in English.  There is not much to the story, but with this type of action movie that makes no difference at all.  If you are the type of person that does not enjoy watching foreign films because of subtitles or for any other reason, I strongly suggest that you give this film a chance.  You will quickly forget that you are reading subtitles or that the words you hear don’t match the lips on screen.  I cannot think of a movie that has more action throughout than this one.  I was very pleasantly surprised when I watched this movie.  So much so, that I actually watched it twice in the last couple of months.  This film came out of nowhere.  It snuck up on me and punched my mind in the face.

The film is about a squad of 20 heavily armed cops who raid a 30 floor apartment building that is home to a drug kingpin and his ruthless gang.  The apartment building has security surveillance cameras and the tenants have plenty of firepower of their own.  When the bullets start running out, that is when the real action begins.

There are many similarities between this movie and Dredd (2012).  To read my review of Dredd (2012) click on this link.  The biggest difference between the two films is that The Raid: Redemption is a far superior film.

The fighting sequences and action in the film were nothing less than amazing.  There is a little overuse of swearing, but the stress that these people are facing justifies it all.    There are martial arts like I have never seen.  There is blood, guts, violence, guns, weapons, fighting, fighting, and more fighting.  The story is not as solid as it otherwise could be.  They took out all of the stops and made this a full-fledged action movie, so really the story does not matter too much.  On the other hand, if the writing had been a little bit better the movie could have easily been a 10. 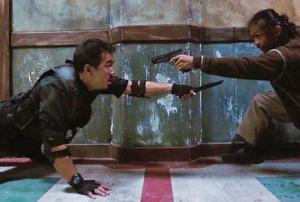 Being that it is a foreign film, the cast and filmmakers will be a bunch of people that you probably have never heard of, but I’m going to list them anyway.

Click on the link below to check out the teaser trailer to the sequel to The Raid: Redemption, it’s called The Raid 2: Berandal (2014).

If you liked The Raid: Redemption, then you will probably enjoy: