When you get a cast together that includes James Franco, Jonah Hill, Seth Rogen, Jay Baruchel, Danny McBride, and Craig Robinson, you just know that you are in for a raunchfest.  The rest of the cast were basically all cameo appearances and they included Channing Tatum, Emma Watson, Paul Rudd, Michael Cera, Mindy Kaling, Aziz Ansari, Kevin Hart, David Krumholtz, Chritopher Mintz-Plasse, Jason Segel, Rihanna and The Backstreet Boys.

The movie is written and directed by Evan Goldberg and Seth Rogen, but based on the short film “Jay and Seth vs. The Apocalypse” by Rogen, Goldberg, and Jason Stone.

Seth Rogen basically took a page from Adam Sandler’s book and got all of his buddies together and decided to make a comedy about the end of the world.  Arguably Sandler has been doing this at least once a year, but his movies lately have been making you wish that it was the end of the world. 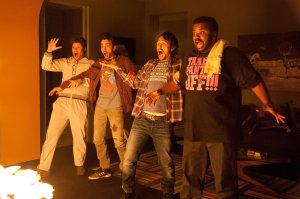 Each actor plays themselves in This Is the End.  They all go over to James Franco’s house for a party.  The rapture crashes their shindig and they are forced to stay holed up in Franco’s house trying to survive.

The film started out a little stale and immediately I was worried that it was going to be a complete disappointment.  Eventually the god of laughter smiled upon me and I found myself convulsing with amusement.  However, it seemed like I was simply having laughing spells.  The movie would be really funny and then it would get too cheesy and stupid and then funny again.  The Comedy seemed to cycle through all types of humor.  Sometimes it was hilarious and other times, not so much.  It was crude, crass, vulgar, stupid, tasteless, and just plain dumb.  Sometimes these things worked and sometimes they didn’t.

Overall the movie was too inconsistent.  After a while, the inconsistency caused the film to drag on.  The humor dissolved and all that remained was tacky stupidity.  I did have a good time laughing while it lasted.