End of Watch (2012) is the ultimate buddy-cop drama done in the style of Training Day (2001), Harsh Times (2005), and Street Kings (2008).  All of those films share the same type of gritty, blunt, in-your-face intensity and show just how unpleasant rundown areas of Los Angeles can be.  Those movies share similarities in style because they were all written and or directed by David Ayer.

In End of Watch Jake Gyllenhaal and Michael Pena are young, up-and-coming brothers in blue patrolling the hellish streets of Los   Angeles, California.  They are pitted together against pure evil.  They take a bite out of crime and crime bites back

A lot of the movie is filmed with smaller handheld cameras which I think helps to make the film seem a little bit more realistic.  If the person is shaky then the camera is shaky. 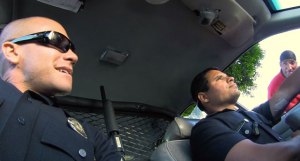 The film takes many of the horrible things that we pretend don’t happen and throws them in our faces so that we cannot deny their existence any longer.  It takes dark subject matter and forces you to have an opinion about it.  When your eyes are opened to the world that exists in the movie, you begin to wonder if there is some truth to that world in the real world.  Does that sort of thing actually happen in real life?  Are people really like that?  The answers to those questions are what make the movie so chilling.

Gyllenhaal and Pena are both tremendous in the movie.  Their characters play off of each other so well that it really makes the film enjoyable to watch.

The language and violence in the film is very potent.  Much of the movie is exceptionally rough and harsh.  There is some humor thrown in to weaken the blow, but End of Watch is a powerful movie to watch.  This type of show is not for everyone.