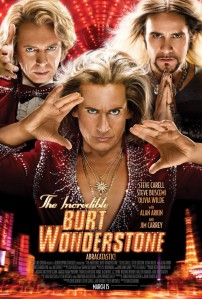 The Incredible Burt Wonderstone looked a little cheesy, but with Steve Carell, Jim Carrey, and Steve Buscemi in a comedy together, I knew it had to be good for at least a few laughs.

Burt Wonderstone (Steve Carell) and Anton Marvelton (Steve Buscemi) are both magicians and longtime friends.  The duo has had a popular show together in Las Vegas for years.  But now, a street performer (Jim Carrey) is beginning to steal their thunder with his crazy magical stunts that he is pulling off throughout the city.  Wonderstone and Marvelton must try to come up with fresh new material in order to try so save their show and their friendship.

I have to say, I expected more from this movie.  It was in fact good for a few laughs, but that was about it.  A lot of the humor was a little too dry and tacky.  Many of the jokes fell short and the story was pretty predictable.

Carrey’s character was by far the funniest.  His goofiness made the movie worth watching, although he was not in enough of the film.

Gandolfini played his part well in one of his final films.  He will be missed.

Buscemi could have been funnier.

Wilde’s character needed more screen time and Garrett should have had a bigger role.

The magic depicted in the movie was fun to watch, but the humor was very inconsistent. 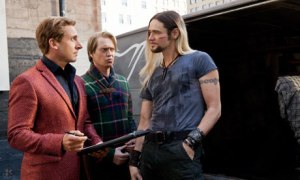 Overall, the comedy superstar talent in this film was somehow neglected.  If the filmmakers had made proper use of the talent that they had to work with, this movie could have been one that you laugh out loud until you cry throughout the entire film.  Instead the laughs were sporadic and the movie was just a step above mediocre.