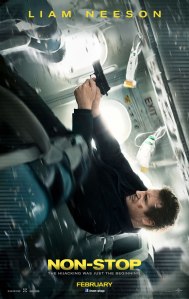 At the age of 61, Liam Neeson has shown us that he can still be an action hero.

Non-Stop is about an air marshall (Liam Neeson) who gets text messages that threaten terrorism on an international flight that he is on.  He eventually becomes suspected in trying to hijack the plane.

The film was directed by Jaume Collet-Serra and the rest of the noteworthy cast includes Julianne Moore, Anson Mount, Michelle Dockery, Bar Paly, and Corey Stoll.

The film looks pretty intense.  It looks like it might have some similarities to the movie Flightplan (2005).

I’ll definitely be seeing this one in theatres.