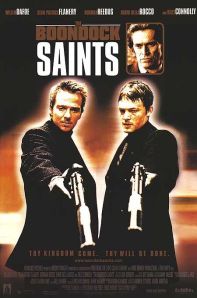 I watched The Boondock Saints for the first time way back in 2000.  I had no idea what the film was about before watching it.  All I knew was that I was a broken teenaged kid who had recently lost his older brother.  I was trying to escape into the world of video games and movies.  The movie was supposed to be a distraction, but I couldn’t help but think of my brother throughout the entire film.

The movie is about two Irish twin brothers (Norman Reedus and Sean Patrick Flanery) living in the boondocks who band together to deliver their own form of vigilante justice on the scum of Boston.  Along the way, they piss off the Russian mob and the FBI.

It’s hard not to enjoy a movie about vigilantes cleaning up their city.  When bad guys die, who cares?  It just makes the world a better place.  This film depicts this all very stylishly.  Of course, there is a lot of killing, cussing, and drinking involved, but it’s all in good fun.

I have watched the movie maybe a dozen times now, and it gets better each time I watch it.  It has a great soundtrack, it’s funny, and you can tell that they had fun filming it.

The film became a cult classic and eventually a sequel followed.  In my opinion, the sequel would have been much more successful if it had not taken a decade before being made. 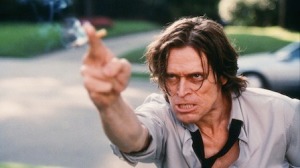 Willem Dafoe’s character in the film is perhaps, the most memorable of his acting career.

The Boondock Saints boosted Norman Reedus’ popularity and he has gone on to become a pretty solid character actor.  He is most known for The Boondock Saints and the popular television series, The Walking Dead.  However, my favorite film that he is in is Deuces Wild (2002).

Most recently, I enjoyed Sean Patrick Flanery’s performance in the final season of my favorite television series, Dexter.

The closeness between the brothers on screen made me really appreciate the performances of Reedus and Flanery.

Troy Duffy put a very unique spin on the storyline and the way the story unfolds is nothing short of awesome.

Fans of mafia movies should enjoy The Boondock Saints.