The main concept in The Purge is a controversial one.  The film takes place in the not too distant future where America has become a safer place to live because annually there is a 12 hour period of time where all forms of crime are legal.  During this 12 hour period of time, you can get away with murder and the police will not be there to stop you.  Hospitals also close down during this time.  This 12 hour period of time where crime is legal is called “The Purge” because it allows citizens to rid themselves of all of the hatred and pent-up anger that they hold inside all year long.  They purge themselves of all of the bad and all that they are left with is the good.

As I said, it is a very controversial concept but let me talk about the film first before I discuss my views on the topic.

The film is about a family doing there best to stay safe at home during “The Purge.”   The father (Ethan Hawke) is a top-of-the-line security system salesman who has ensured that his house is as safe as it can be.  In a world where crime is legal for half of a day every year, you better have a good security system to protect yourself and your loved ones.  An unfortunate turn of events finds the family with a man in their home who is being sought after by a violent group of people who intend on murdering him.  The family is given the choice to give up the wanted man or become the new targets of the group. 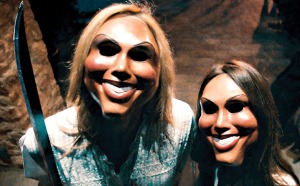 The Purge is written and directed by James DeMonaco.

The world that is created in The Purge would be a frighteningly dreadful one to live in.  We already know that basically anything insane can happen in our world, but at least we have law enforcement and hospitals to help us when it does.  If you take those services away, then you take away order and are only left with chaos.  The film successfully depicts chaos in America.

The movie is vicious.  The intensity of the film will keep your heart racing throughout as you try to anticipate what will happen next. 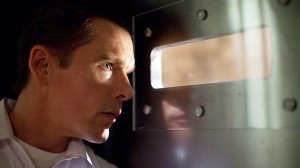 I felt that the entire cast did an excellent job with their parts of the film, but the standout performances were those of Ethan Hawke and Rhys Wakefield.

Hawke’s role was a great follow-up to Sinister (2012).  If you enjoyed Sinister, then you will most likely enjoy The Purge. 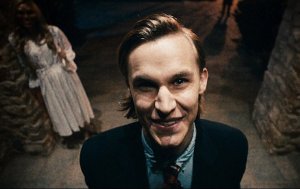 This is the first movie that I have seen Wakefield in, and I have to say, he did an outstanding job being creepy.  His character was tailor made for him.

Once you get past the holes in the main concept of the film, the movie is overall a very solid thriller/horror.  I say that there are holes because it is hard for me to believe that America would ever allow its citizens to live in chaos and anarchy.  Once you allow chaos, how do you bring back order?  I don’t think it is as simple as putting a timetable on chaos and expecting people to actually follow it.

If there actually was “The Purge”, I think that all it would do is allow evil people to kill or commit crime and get away with it.  How would that be good for anybody?  I don’t believe that the crime rate would go down either.  I think that there would probably be a lot of crimes and murder strictly out of retaliation for what happened during “The Purge”.  It would almost be like encouraging people to do bad things.  America would not be a better place to live in.

Those are just some of my thoughts on the topic.  I’m sure that you have your own idea of what would be wrong with the idea of “The Purge” and I would be curious to hear what you have to say about it.