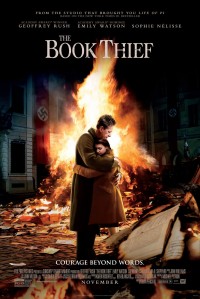 The Book Thief is a heartbreaking and heartwarming story of innocence, stolen.

I’ve always been drawn to stories about World War II.  Movies about WWII have a tendency to be very powerful films if done correctly.  I think that this is because it was such a hard and troubling time in the world when Hitler was in power.

The movie is based off of the novel with the same name by Markus Zusak.  The film is about Liesel (Sophie Nelisse), a young girl without a family in Nazi Germany during WWII.  She gets taken in and adopted by a couple who also hide a Jewish boy under their stairs.  With all of the terrible things going on around her, Liesel takes comfort in learning how to read.  She begins to read whatever books that are available to her.  Eventually she starts stealing books and sharing them with her new family.

The film was slower, but a true drama.  It depended solely on acting and story to get its point across.  Don’t expect an action-packed war movie.  However, a story about Nazi Germany during WWII is intense enough.  Although the story is pretty serious, I liked how there was a bit of humor thrown in to cut the tension and make it more enjoyable.

The Book Thief had some similarities to the movie The Pianist (2002), except that it was not as intense.

I will admit, the touching story made me shed a few tears.  The movie does a great job of making you care about the characters.  The acting draws you into the story.

Geoffrey Rush and Sophie Nelisse both deliver genuinely heartfelt performances.  The presence of Rush was what was needed to make everyone act on a higher level.  He was the glue that held the movie together.

The set was a work of art.  Germany during the late 30s and early 40s was duplicated very believably.  That task could not have been a simple one.

I applaud the filmmakers for getting a movie like this one made.  In a movie world so consumed with special effects, action, sequels, superheroes, and unoriginality, The Book Thief is the type of film that we need more of.  It’s a genuinely refreshing story that takes plenty of risks.