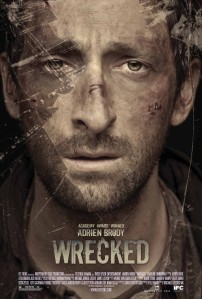 Wrecked is a low budget independent film that may have exceeded expectations if given the proper opportunity.

Before watching this movie, I knew nothing about it except for the fact that Adrien Brody was the main character.  I have been a big fan of Brody ever since I saw the film The Pianist (2002).  He acted his heart out in that movie and I quickly came to find out that he usually does in all of his films.  It’s no wonder that he received an Academy Award for Best Actor for his performance in The Pianist. 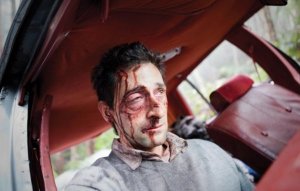 Wrecked is about a man (Adrien Brody) who awakes to find himself badly injured in a mangled car wreck in the middle of a densely wooded area at the base of a mountain in the middle of nowhere.  He has no memory of how he got there, who he is, or who the dead passengers nearby are.  He is stuck inside of the car and is forced to try to survive as he contemplates his past and how he got into his current situation.

It takes a highly talented actor to make a film like this watchable, let alone entertaining.  Brody was up for the challenge and he was a superb choice for this role.  The pain that his character felt in in the movie appeared genuine in every way.  You feel for his character as if the events that are happening to him on screen are actually happening.

The film is pretty gruesome and intense.  There is a bit of language throughout, but it all serves to make the story more realistic.

Unfortunately, I think that this movie is underrated and under watched.  It didn’t get the chance that it deserved in theatres.

The movie grabs on to you in the very beginning and keeps you guessing what will happen next.  It is slow at times, but that is to be expected when there is basically only one person in the film.  The suspense holds your attention throughout as Adrien Brody’s character is injured in the wild and facing what the wilderness has in store for him.

If you liked Wrecked, then you will probably enjoy the following films: