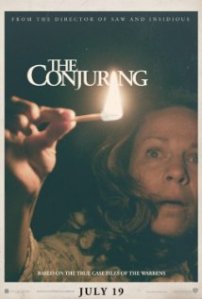 The Conjuring (2013) (Click on the title for my full review)

I have mentioned before that I am not a huge fan of horror movies.  They are a dime a dozen these days and usually slasher films that lack a plot or a point.  That being said, I recognize when a movie looks like it could be scary and I do appreciate a horror movie if it is done right.  James Wan has shown us that he is capable of making brutal bloodbaths that he calls movies i.e. Saw (2004) and Dead Silence (2007).  But, when Wan directed Death Sentence (2007), he proved that he was very capable of making an awesome thriller.

From the preview, it appears that Wan has toned down the blood and decided to go more for the thrills.  It shows that it might have some potential.