Director Baltasar Kormakur pulled out the big guns for his new Action/Comedy 2 Guns.  With a cast that includes Denzel Washington, Mark Wahlberg, Bill Paxton, James Marsden, and Paula Patton, how could you go wrong?  This is the question that I asked myself.  My answer was that you most likely can’t go wrong.  I was very excited to see this film, so I caught one of the first showings.

The film is about an undercover DEA agent (Washington) and an undercover Special Forces officer (Wahlberg) that team up to get close to a drug cartel.  The catch: each man is unaware that the other is a cop. 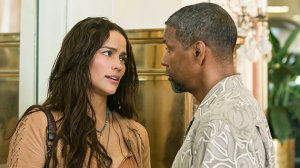 2 Guns is a high caliber adventure that is fully loaded with twists and turns, plenty of action, an amazing cast of edgy characters, lots of laughs, and a whole lot of fun.

Denzel Washington is one actor that has never really disappointed me.  He has always acted his heart out in every role that I have seen him in.  He is certainly one of the greats.  He is one of the most consistently solid actors of our time.  His role in 2 Guns is evidence that he has no intention of changing his ways or slowing down.  His character is suave and in control.  He lets his presence be known on screen.  If he were a Jedi, the force would be strong with this one. 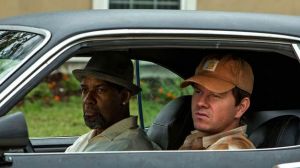 Mark Wahlberg’s acting ability has noticeably improved over the years.  It was never bad by any means, but he has definitely found his niche.  He has always taken a no-nonsense approach to his acting.  This has given his movies more intensity and energy.  Over time, he has learned to develop a different personality to each of the characters that he plays.  He has become very versatile.  In 2 Guns, he somehow managed to be funny and a badass.

The witty banter exchanged between Washington and Wahlberg was hilarious.  That, mixed with each man’s physical ability for violence made the movie very entertaining.  Their characters played off of each other wonderfully.

Besides Haywire (2011), I have not seen Paxton in anything great for a while.  This is his best film movie Frailty (2001).  He played a good tough-guy in this film.

There was never a dull moment in this movie.  If you are looking for a lot of action, some good laughs, great acting, and an overall awesome film experience, look no further than 2 Guns.  This movie has everything.  It’s the best Action/Comedy film so far this year, and will probably be the best of the year.

If you enjoyed 2 Guns, then you will most likely enjoy:

Denzel Washington and Mark Wahlberg teamed up together and against each other in an action/drama.  This movie sounds good and looks even better.  Great title.  Great cast that also, most notably, includes James Marsden, Paula Patton, Bill Paxton, Edward James Olmos, Robert John Burke, Patrick Fischler, and Fred Ward.  It is directed by Baltasar Kormakur.

I think that it is basically guaranteed to be a big hit.  I will definitely check it out in the theatre.