In honor of Groundhog Day today, I decided to review the 1993 film of the same name.

Phil: “What would you do if you were stuck in one place and every day was exactly the same, and nothing that you did mattered?”

Phil (Bill Murray) is a weather reporter who is sent to Punxsutawney, Pennsylvania on Groundhog Day to cover the Groundhog Day festivities.  Although he is unhappy with his assignment, he follows orders and soon finds himself stuck living the same day over and over again.

Although I saw the movie in the theatre when I was a kid, I did not truly appreciate the humor in it until I was an adult.  The more Phil is forced to repeat the same day, the harder and harder you will laugh.

The film is a comedy classic and this is mostly attributed to the pairing of Harold Ramis directing and Bill Murray starring.  The two men were good friends at the time of filming and Ramis had previously directed Murray in Caddyshack.  They both also had starred together in Ghostbusters (1984), Ghostbusters II (1989), and Stripes (1981).  Ramis wrote the screenplay for all of those films including Groundhog Day. His writing of Groundhog Day is superb and he also has a cameo appearance in the film.

The comedy is very tastefully written and the film is eventually quite touching.

Andie MacDowell, Chris Elliot, and Steven Tobolowsky are all excellent additions to the film.  Bill Murray’s brother Brian Doyle-Murray even has a bit part in the movie. 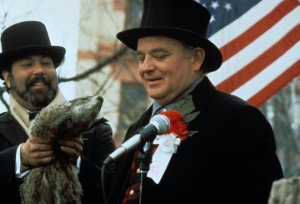 If you have not seen Groundhog Day, I strongly recommend that you do so immediately.  Go out and rent it, buy it, download it, or borrow it.  Steal it if you have to.  You will not be disappointed, and it may become a holiday tradition for you and your family just as it has for me.  I have watched it over and over and over again.