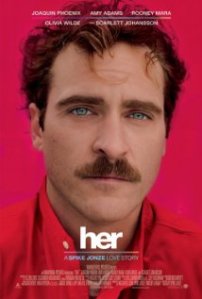 Her is a love story about a lonely antisocial writer (Joaquin Phoenix) who falls for an artificial intelligence operating system.

The film is written and directed by Spike Jonze and the rest of the noteworthy cast includes Scarlett Johansson, Amy Adams, Olivia Wilde, Rooney Mara, and Chris Pratt.

Phoenix is sporting a creeper mustache and seems like he will be as weird as ever.  Even though he looks like a weirdo in this movie, I’m sure he will do an awesome job.  Part of me jokingly could see Phoenix be his character in real life about 20 years from now.  I’m not making fun of him though, he is a great actor.  It just looks like he might play his part too well.

They somehow managed to get 4 of the most famous young actresses currently working today in the same film.  You don’t see that very often these days.

This film looks like it could be pretty funny in a disturbingly quirky kind of way.