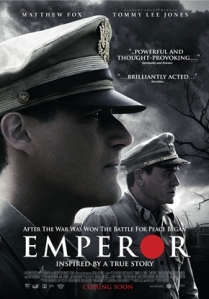 I have always wondered what Japan would have been like at the end of WWII when the Japanese surrendered.  It seems to me there would be a lot of chaos and resentment during the rebuilding process.

Emperor is based on the book “His Majesty’s Salvation” by Shiro Okamoto.  When WWII ended and the Japanese had surrendered, General Fellers (Matthew Fox) was given 10 days to weed through the intricate web of power surrounding the Emperor and detain the men responsible for the attack on Pearl Harbor.  He was also ordered to figure out whether or not Emperor Hirohito was a war criminal and if he should be hanged.  During his investigation, Fellers was also on a personal quest to find his missing Japanese girlfriend, Aya (Eriko Hatsune).

This is the first movie of its kind that I have seen.  The film was not quite the powerful film that it could have been.  However, it was put together nicely, well acted, and well directed.

I thought that the film did an excellent job depicting the ruins of Japan.  It was eerie seeing the aftermath of entire cities that had been obliterated.

The movie felt like it was actually taking place right after WWII.

I feel that Matthew Fox has recently proved himself as a capable actor.  It was the film Alex Cross (2012) that made me take him seriously.  He did a good job in Emperor.

It was yet another no-nonsense role for Tommy Lee Jones and he played the part as well as he always does.

The film did a great job of telling a story that I am sure that a lot of people are not familiar with.  If you are a fan of WWII movies like I am, then you will probably enjoy this one.  It felt a little slow at times because there are a lot of conversations with translators translating back and forth.  They go back and for between that and using subtitles and it makes the film seem longer than it really is.

There is not a whole lot of violence or language and the movie was very tastefully made.