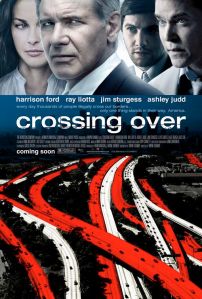 Crossing Over is a Wayne Kramer written and directed movie that fell through the cracks.  Kramer is known for Running Scared (2006), The Cooler (2003), and most recently Pawn Shop Chronicles (2013).  Running Scared was excellent and The Cooler and Pawn Shop Chronicles were both very solid films.  Crossing Over did not appear to me like it would be any good.  I wanted to give it a try however, because Kramer usually makes quality movies and the noteworthy cast includes Harrison Ford, Ray Liotta, Ashley Judd, Jim Sturgess, Cliff Curtis, Alice Eve, Alice Braga, Mahershala Ali, Josh Gad, Michael Cudlitz, and Marshall Manesh. 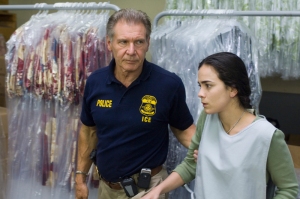 Crossing Over is about multiple stories of immigration to the United   States.  It follows multiple immigrants from all over the world who are trying to become legal citizens in Los Angeles.  Some go through the proper process of trying to become legal citizens, while others try to do so illegally or skip the process altogether.  Sometimes their stories intertwine and other times they do not.  The film also follows the lives of the people who are trying to help these immigrants to become legal and also the ones who are trying to deport them.  It deals with how sometimes mixing different cultures together can clash and how sometimes it can bring people closer together.  It is all different perspectives on immigration in America.

The movie jumps all over the place from story to story.  There is not a lot of character development because the movie is trying to tell too many stories instead of concentrating on one.  As a result, it is hard to feel anything for the characters and it turns into a jumbled mess.

Ford gave a standout performance in the film.  He was not given a lot to work with, but he managed to be likable anyway.  He single-handedly tried to hold the broken pieces of the movie together, but there is only so much that one actor can do.

Overall the movie was hard to enjoy because it jumped around way too much.  It was a waste of a quality cast and it was a waste of time.  This is by far Wayne Kramer’s worst movie.

It’s always interesting to me to find different movie connections.