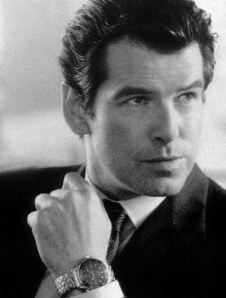 Happy Birthday to Pierce Brosnan!  The actor formerly known as James Bond will be celebrating a major milestone today, he turns 60 years old.

Of course Brosnan is most known for his suave portrayal of the iconic Bond character.  He did walk in those shoes 4 times: Goldeneye (1995) (my favorite Pierce Brosnan Bond), Tomorrow Never Dies (1997), The World is Not Enough (1999), and Die Another Day (2002).

He is almost exactly 7 months older than my father and I remember my dad taking me to see all four of his James Bond movies in the theatre over the years.  At the time I always thought it was pretty cool to think that James Bond was the same age as my dad. 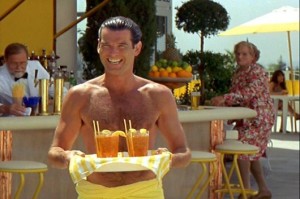 I remember hating Pierce Brosnan’s character in Mrs. Doubtfire (1993) because he played his part so well.  After seeing him as Bond, I thought Pierce was pretty awesome.  After re-watching Mrs. Doubtfire, I liked him even more.

Brosnan was a superstar for a while in the 90’s and early 2000’s, but then his career began to fade.

The Matador (2005) was a sort of comeback movie for him.  In it he plays an aging hit man who is beginning to lose his edge.  It’s a dark comedy that also featured Greg Kinnear.  The role seemed so out of character for Pierce, but his performance was priceless.  The movie could have been better, but his part was great. 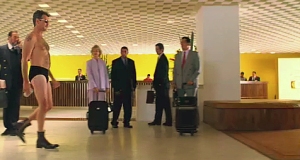 He has continued making many movies, but the only one worth mentioning in more recent years is The Greatest (2009).

Somewhere along the way he lost his status and has not been able to be a part of big films.  Of course, I guess that is what comes with age.  I’m still a fan though.  Cheers to you Mr. Bond! 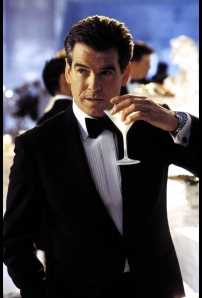