In the new film, X-Men: Days of Future Past (2014), Wolverine (Hugh Jackman) is sent back in time in order to try to change the past and prevent a horrible future.

I love movies that have to do with time travel.  X-Men movies have been better in recent years, and this one, once again, has a great cast.  This should prove to be a recipe for a fun and enjoyable movie.

I’ve never been a huge fan of Rosario Dawson, but James McAvoy and Vincent Cassel in a psychological crime thriller involving hypnotism and directed by Danny Boyle sounded like it could have potential.

Simon (James McAvoy) works at an art auction.  He has gotten in way over his head with gambling debt that he owes a ruthless criminal named Franck (Vincent Cassel).  In order to settle his debt with Franck, Simon agrees to help rob an expensive painting from the art auction.  Things go wrong and Simon suffers a head injury which causes him to have amnesia.  He cannot remember where he left the painting and therefore cannot pay his debt.  Simon turns to hypnotism to try to help him remember and hopefully save his life.

Trance is one of those movies that as soon as it ends you will want to watch it all over again just to try to figure it all out.  It is intentionally a little hard to follow.  It is a film that will play mind games with you.  Because of the hypnotism aspect of the movie, it is often hard for the viewer to tell right away what is real and what is not.  As events unfold on screen, you are slowly able to piece things together, but the movie keeps you guessing.

Each actor does what is necessary for their characters and nothing more.  The film is thrilling enough.  It felt like something was missing in the movie, but because it was so puzzling, it sort of made up for what it was lacking.  Movies are meant to entertain, and this one served its purpose.

There is a bit of violence and gore, lots of nudity, and plenty of language all with a very fitting trance soundtrack.

Overall, if you enjoy movies that are unpredictable and really make you think, then you will probably like Trance.

If you liked Trance, then you will probably enjoy the following films: 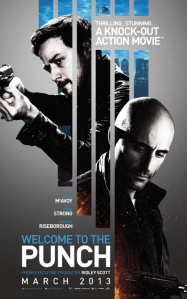 The idea of James McAvoy and Mark Strong in an action movie is fascinating, especially when Ridley Scott is the executive producer.

Strong plays a wanted criminal and McAvoy is the man trying to take him down.

The film looks like it will be filled with some entertaining action, but may be lacking something.  Has this story been told too many times?  If Ridley Scott had also directed the film then maybe it would look more intriguing.