Kevin Costner has not been the lead in a solid movie since Mr. Brooks (2007).  He has been doing one thing each year ever since.  But for 2014, Costner has 5 films either waiting to be released or in the works.  3 Days to Kill appears to be the most promising of the 5 films and could likely be his comeback movie.

The film is about a Secret Service agent (Kevin Costner) who is dying.  He has been trying to spend more time with his daughter and wife, but he is offered an experimental drug that just might save his life.  In exchange for the drug, he has 3 days to complete one last job.

The film appears like it might have some similarities to Taken (2008).  Costner’s character is trying to spend time with his family while at the same time on a mission and cracking skulls. 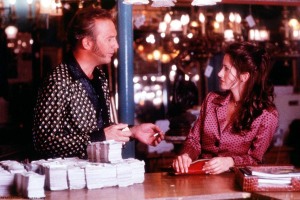 Kevin Costner as an Elvis Impersonator chats with Courteney Cox over a pile of cash in the film 3000 Miles to Graceland (2001).

With the countless number of sequels, remakes, and superhero movies that are being spewed out these days, I have become very skeptical and picky when it comes to deciding which of these movies I will see and which I will avoid like the plague.

Honestly, Man of Steel was a difficult choice at first.  My initial reaction was derision.  I rolled my eyes and scoffed.  How many Superman movies does this world really need?

Superman and Batman are probably my favorite superheroes.  What I always enjoyed about those characters was the fact that they both had alter egos and they both were always trying to do good by helping people.

The thing is I like Batman better than Superman.  Batman is more real.  He puts on a costume and goes out, mostly at night, to right wrongs in his city.  Batman is fed up with the scum in his city and he tries to clean up the streets.  Superman on the other hand, is an alien from another planet who ends up on earth.  Superman looks human, but has a number of superpowers that make him almost godlike.  He disguises himself as a human, but puts on a costume when its time to fight the bad guys.  He is faster than a speeding bullet, can fly, has x-ray vision, and is virtually invincible except around kryptonite, etc. etc.  Superman is a godlike alien from another planet.  Batman is a human vigilante.  Which is more believable to you? 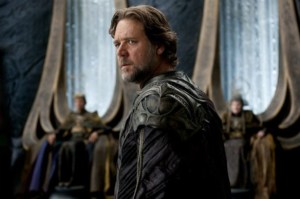 Following my initial reaction about the new Superman, I learned who all was cast in the movie.  I raised one eyebrow as I contemplated the film’s potential.  The cast includes Russell Crowe, Kevin Costner, Amy Adams, Diane Lane, Michael Shannon, Laurence Fishburne, Harry Lennix, Richard Schiff, Christopher Meloni, Antje Traue, and Ayelet Zurer.  Great cast right?  Except Henry Cavill is a dud and he was cast as Superman. 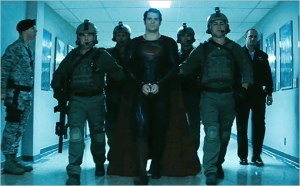 In my opinion, they needed a far superior actor to play the lead role.  Sort of like Christian Bale played Batman.  Instead they surrounded an almost nobody with an awesome cast.  The part will boost Henry Cavill’s career, but that doesn’t make him a better actor.  They needed someone like Mark Wahlberg, Bradley Cooper, Jeremy Renner, Jake Gyllenhaal, or even Matt Damon.

Still, the strong cast was enough to make me want to see Man of Steel.  It also helped that Christopher Nolan produced the film and both he and David S. Goyer wrote the screenplay and story.  Of course, Nolan and Goyer also both wrote The Dark Knight Trilogy, which Nolan also directed.  However, Nolan did not direct Man of Steel, Zach Snyder did instead.  Snyder is a capable director, but Nolan is far superior.

Man of Steel is about a boy who finds out that his parents on earth are not his real parents.  It is believed that he was sent to earth from a different planet.  These details are revealed to him by his earth parents after he figures out that he has super powers.  Now he must learn what he was sent to earth to do and what type of man he will become. 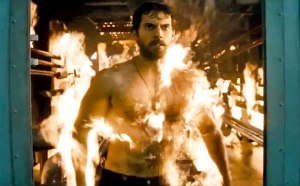 The film was bursting at the seams with special effects.  The aspects of Superman that I do not enjoy were highly prevalent in the movie.  I don’t like the overuse of super powers and Michael Bay-esque explosions, along with multiple superhuman aliens in an endless battle of invulnerability.  Everything in their path becomes obliterated and it all seems so unrealistic.  With that being said, I expected the film to be that way.  But, I also hoped that the film would concentrate more on the humans on earth than the aliens on Superman’s home planet.  That hope was shattered.  It became more about Superman stopping an alien invasion on earth than Superman just stopping bad guys on earth. 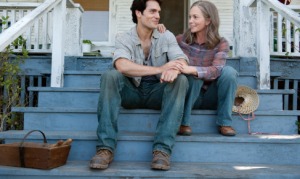 Although there were a few things about the movie that I did not like, I will admit that those things were done tastefully.  The special effects were amazing.  They were too much at times, but they were also insanely awesome at times.  The cast was great, but Henry Cavill could have been replaced with someone better.  Everybody else’s performance made up for his.  It’s not that he was bad, but he just could have been much better.  The supporting cast should not be better than the main character.  That is not a solid foundation for a film.

Crowe, Costner, Shannon, Adams, and Lane all made the movie worth watching.  They used their acting super powers to totally make the film.

Man of Steel is a worthy update to previous Superman movies.  Even a superhero skeptic like myself, enjoyed the movie.  With the obscene amount of action in the film, it will certainly be better on the big screen.

I know I’m a little late on this one, but yet another Superman movie is coming.  This one does have a great cast though.  Henry Cavill plays superman and the rest of the cast includes Amy Adams, Russell Crowe, Michael Shannon, Kevin Costner, Diane Lane, Laurence Fishburne, Ayelet Zurer, Michael Kelly, and Richard Schiff.

Henry Cavill was an interesting choice for the role of Superman.  He is nothing special, but the rest of the cast is awesome.  I’m not a huge superhero movie fan, but the cast for this one is what will get me to see the movie.

The film is directed by Zach Snyder.

Who do you think should have played Superman with such a huge supporting cast like this one?

Unfortunately I had the displeasure of viewing these vile movies.  I was duped into thinking that each one of these films could do no wrong because of the awesome actors that were in them.  Boy was I wrong.  Do yourself a favor and stay as far away from these movies as you can get.

Tom Cruise: Interview with the Vampire (1994)

When I look at this list, I can only ask myself one question: What were they thinking?