Note: I will continue to update this list throughout the month of October.  Each month I will keep updating a new list that will have more and more movies on it.  If you like what you see, I hope that you will come back for more in the future.

2013 is not over yet, but the last couple months of the year always seems to have a ton of new releases that get crammed in just in time to be considered for the current year’s Academy Awards.

Click on each movie for my full review, rating, trailer, and poster artwork for that film.

The Best Movies of 2013 (in alphabetical order)

Because the year is not over yet, I will continue to add to this list.  That is of course, if I see a movie that is good enough to be on it.  Considering the list of movies that are set to release before the end of the year, I’m sure that I will have no problem adding to this list.  I hope that you will come back to www.brockingmovies.com to see any additions to the list.

Posted in The Best Movies

Note: I will continue to update this list throughout the month of September.  Each month I will keep updating a new list that will have more and more movies on it.  If you like what you see, I hope that you will come back for more in the future.

For more Redbox related material click on the following links below

It is not often that I watch a horror movie.  My reason behind this is not because I have anything against the genre.  I watch a horror movie because I want to experience the rush of being scared.  I crave the feeling of chills running down my spine as something eerie is taking place in front of my eyes.  I long for the moment when I am so absorbed in what is happening in a film that when something jumps out at the screen it causes me to shoot out of my seat like I was fired from a cannon.  When the show is over and there is complete and utter silence, I desire the paranoia that ensues as I fear that something is out there in the murky darkness and coming to get me.  That is the whole point, right?  A scary movie is meant to scare you.

Scary movies do not scare me anymore.  At least most of them don’t.  They just are not made like they used to be.  The Possession is no exception.  The film did not frighten me in the slightest.  At best, the little girl in the movie who was supposed to be possessed (Natasha Calis) did a pretty good job of acting creepy.  There were a few scenes that had things jump out at you, but they were too predictable.  Not only was the movie predictable, but it was also not very original or surprising.  As the film neared the end, it became more and more impossible.

The movie followed what seems to be the basic horror movie outline these days.  It starts out at a scene that tries it’s best to be intense and attention grabbing.  When that scene is over, the mood lightens and the story starts at a snail pace.  Characters slowly develop and after a while, little by little, weird crazy things start happening.  These things are often overlooked as a fluke until they get more and more intense.  Usually not everybody realizes that there is some sort of problem until it is so blatantly obvious that you would be stupid not to see that something is wrong.

Finally when everybody understands that there is a predicament, somebody actually gets the idea to run from it or do something about it.  This just makes the issue worse and it becomes more powerful.  When the story reaches its climax, the problem gets solved.  Everyone starts feeling better and they go back to leading their normal lives.  Or do they?

That outline just about sums up The Possession and the majority of all of the other horror movies that are out there.  There is the occasional scary movie that will surprise you.  This was not one of them.  It did not make me jumpy, nor did I get the chills.  I never felt scared during the film at all.  After the movie was over I did not get paranoid.  I went to bed and slept like a baby. 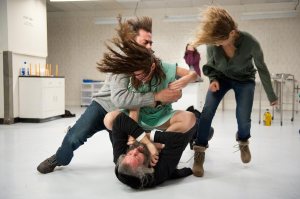